Political Protests are one thing 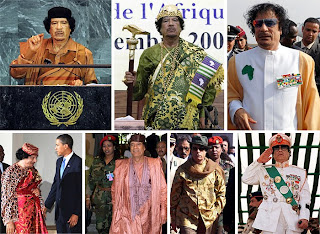 But calling him a foppish Gene Simmons apparently too much!

Actually no joking matter, fresh off becoming a recently declared Bush-buddy, Qaddafi is determined to quash protests the way Syria's Assad family does.

Human Rights Watch yesterday reported that at least 24 demonstrators had been killed in Libya over the last two days, and some speculate that that number could be much higher. In terms of communication and the availability of reliable news, Libya closer resembles North Korea than many of its neighbors.

but hw many shoes does he have?

If he wants to match the Assads he will have to bomb half the city of Benghazi into rubble like Assad did with Hama. Until then Gaddafi is just a flaked out punk.

Qaddafi and the Wisconsin teabaggers have a lot in common in terms of how they want to handle protestors.