Not this shit again

"Is he of that stature? The answer is yes," said Grover Norquist, chairman of the Reagan Legacy Project. "Reagan was the most successful president of the twentieth century. He took a country that was in economic collapse and militarily in retreat around the globe and turned it completely around."

Yeah, he was so much more successful than that complete failure Franklin Roosevelt. All that SOB FDR did is prevent a revolution, restore the economy, create social security, the minimum wage, and help win the greatest military conflict in world history from his wheelchair. What a douche!

Tell you what Grover, let's compromise, there's a mountain carving in the Philippines that would do the trick, it just needs to be touched up a tad* and it will look just like your guy. 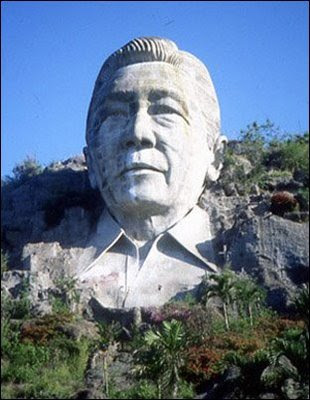 Peggy Noonan can go there an rub herself raw below it.

It actually does look a little like the Gippet [sic].

Well, Ferdinand and Imelda and Ronnie and Nancy were all famously close. Ronnie admired Marcos for his professions of rabid anti-communism and his talent for wholesale theft from his own people, while Nancy and Imelda just got all warm and runny over what stolen money could do for a girl's wardrobe.

I suppose ol' Grover has forgotten that the Reagans always looked like rubes from the country just in town for their first big trip to the city, every time Ferdinand and Imelda showed up. They were in awe of shallow, dictatorial thieves.

Says a lot about the Reagan years....

The statue could depict RR Standing Tall in Lebanon before he tucked his tail between his legs and ran like a shot deer. You know, reversing all that military retreat around the world.

butbutbut it was WW2 that saved amerika! not FDR.

the raygun idolization is GAY GAY GAY.
not that here is anything wrong with that.

I believe Reagan was divine. After he screwed Doris Day she became a virgin.