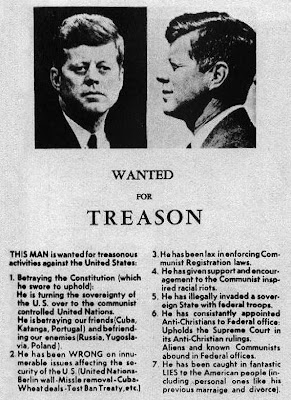 Latest in a series:

A person at a Tuesday town hall with Rep. Paul Broun, R-Ga., got up and asked, "Who is going to shoot President Obama?"

The exact wording of the question is not clear because, the Athens Banner-Herald reports, there was a lot of noise at the event. Perhaps more significant than the question was the response of the crowd and Broun, who is a member of the Tea Party Caucus and one of the most right-wing members of Congress.

The question prompted a "big laugh" from the crowd, in Oglethorpe County, Ga., according to the Banner-Herald. Broun, for his part, did not object to the question.

UPDATE: In fact, he and good part of his audience thought it as awesome.

Mark Farmer of Winterville, Georgia went to the meeting on Tuesday to ask a question about Social Security reform, and said in an e-mail to TPM he was "shocked by the first question and disgusted by the audience response."

"I was gravely disappointed in the response of a U.S. Congressman who also laughed and then made no effort to correct the questioner on what constitutes proper behavior or to in any way distance himself from such hate filled language," Farmer wrote.

isn't all of georgia in the borg?

So, the neo-confederate Teabirchpublicans are getting restless for an assassination, are they?

I guess to go with the overthrow of actual representative government.

Except, of course, when the representing is for Real Americans only - the Teabirchpublicans.

I don't even blink an eye or get a reactionary shudder anymore from these stories........... doG, have we fallin' so far?