Eternal Dough for the Spotted Pantload 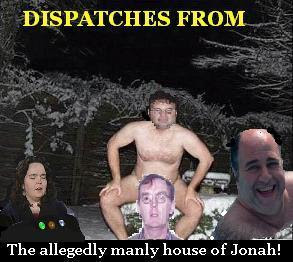 No, he wants to know if Barack Obama has the guts of fictional President Bill "Independence Day" Pullman had in using nukes against an actual, but completely fictional, alien invasion.

You know, the important, realistic, shit.
Posted by Attaturk at 7:49 AM

somebody wants a nuke between their legs. yee haw!

Didn't nuking Houston in the movie totally not work at all???

If we are using Independence Day to judge real life people, then we have to remember that it was really Jeff Goldblum, the clever liberal environmentalist computer geek, who saved the world.

Doughy has always had a rather tenuous grip on reality, so it comes as no surprise that fiction is his standard for judging the real world....