We here at Rising Hegemon because of our many "industry contacts" (i.e. candid photos) have access to several experts. Unfortunately, we never need them for their area of expertise. With that in mind, here is the NFL Draft Guru's analysis of candidates for the position of "America's Next Top Robed Model"

No. 1: Elena Kagan: This nearly 50-year old Jewish American Princess from New York City graduated with honors from Harvard Law School in 1986. She is known for her demonstrative manner and quick-twitch muscles in her twittering fingers and is known as the best Liza Minnelli impersonator on the Bench. Considered a moderate by many, her defenders in the Obama Administration are quick to point out that many people thought that same thing about Obama and look at the socialist/commie Glenn Beck said he became.

No. 2: Dianne Wood: This 49-year old is described as being full of desire and has a non-stop motor at the line. Though they are of different political philosophies, when former President Bush saw her, he said he "wanted some Wood". Born on the 4th of July, this obviously patriotic aspirant of a socialist hell-scape believes in reproductive choice, and keeping Tony Scalia liver-deep in scotch. Known as a hard-worker and library rat, Ms. Wood graduated with honors from the University of Texas Law School where she spent years studying the habits of the reclusive Americus Teaparticus and was voted law student who looked most like a Century 21 Real Estate Agent. She also is a Protestant, so in addition to a sub 7.0 40 time, she fills a need on the Court.

No. 3: Merrick Garland:A surprising choice at this time, as he was a strong candidate to replace Justice Souter when he retired last year. This was because people would not even know there had been a change in the court. Garland is known in the judiciary as exciting as a walking-talking 57-year old ball of oatmeal and was a recipient of the 2007 Most Regular Man in the World Award by the National Laxative Association, which is indicated by his excellent 40 time, especially in the morning. A 1977 honors graduate of Harvard Law School, Merrick has stated he looks forward to a lifelong tenure of mocking Yale Law School graduates who cannot find a penumbra of rights in their own pants.

No. 4: Tim Tebow: Oh sure, he doesn't know much about the Constitution, like THAT'S a real requirement anymore, but the young man is both a Protestant and a WINNER! 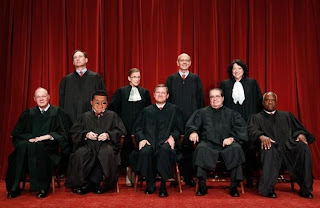 But who has length? Who has tremendous upside potential?

LOL Thanks! I needed that.

Okay, I'll bite. Who the fuck is Mel Kiper?

"Considered a moderate by many, her defenders in the Obama Administration are quick to point out that many people thought that same thing about Obama and look at the socialist/commie Glenn Beck said he became."

Kagan? I fear she'll turn out to be a right wing nutcase like her namesakes. The prospect of a Kagan on the Supreme Court completely freaks me out.

"Since becoming Solicitor General of the United States, Ms. Kagan has taken many unpopular positions on cases before the Supreme Court that needs to be reviewed by the public. The first set of cases that comes to mind are the political prosecution cases in Alabama and Mississippi. In one of the cases, Ms. Kagan has asked that the Supreme Court not review the United States vs. Siegelman matter. This is contrary to ninety-one US Attorney Generals demanding that the Supreme Court hear the case because of all the abuses of power by the prosecuting team from the DOJ and the United States attorney's office from the Middle District of Alabama. Clearly to ignore this matter one has to wonder about Ms. Kagan's possible Neocon roots. The second set of cases that comes to mind are the detainee cases where Ms. Kagan is taking the Arch Neocon position that detainee's have no rights and can be detained indefinitely. The third set of cases are the federal wire tapping cases in which Ms. Kagan apparently believes, like all good Arch Neocons, that American citizens have no rights not to be listened in on even when proper warrants have not been obtained by the government. Therefore, the question becomes, 'Why is this woman considered a liberal and what is President Obama thinking when he is considering appointing her to the United Supreme Court bench?'"