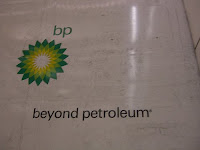 Oh BP was there no bit of moral turpitude beyond your grasp last year? Guy in jail for killing 270 people by bombing a jet over Lockerbie, Scotland pales in comparison to an oil drilling deal:

BP, Europe’s second-largest oil company, successfully lobbied the government to get Al-Megrahi included in a prisoner transfer agreement after the Libyans warned they would pull out of deals if he were left out.

And helping out, naturally:

But there was nothing "improper" about this somehow.

We cannot let the little matter of international terrorism and mass murder get in the way of our precious corporate profits -- that's what limiting peoples' civil liberties are for.

Good thing the American government doesn't do stuff like this (casual whistling ensues). And that last statement is true because being an American, history usually matters only when it can be used on various sports teams' message boards, or worshiping a version of the "founders" they'd laugh at three-fifths of the time. Besides, we'll never get to see those Cheney Energy Task Force notes anyway.

(photo via Ian Tait at flickr.com)

Al-Megarhi's still alive and kicking at his wife's family villa. That's the kind of compassion you only see when the wallet biopsy hits paydirt. Or in his case, a gusher.

oil is a very greasy thing and gets many dirty.