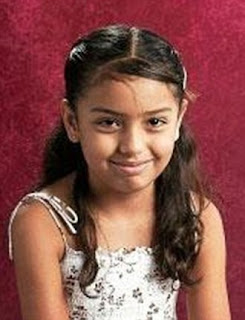 Though one wonders just how apeshit right-wingers would go if this involved a "mexican" drug gang instead of some asshole right-winger:

On Monday, a jury in Tucson found former beautician Shawna Forde guilty of killing nine-year-old Brisenia Flores and her father Raul in a bizarre paramilitary raid on the Flores home in 2009. Forde, the leader of a group called "Minutemen American Defense," is what you might call an anti-immigration activist, if you include murdering fourth-graders under your definition of "activism"

And it gets even worse:

Brisenia Flores was gunned down at point-blank range in her own home in Flores, Arizona, as her terrified mother Gina Gonzalez, who had also been hit, played dead on the floor.

She sobbed as the court was told how she had heard Brisenia's desperate pleas as her killer stood over her.

'I can hear her telling him to "please don't shoot me."'

Monsters.
What a horror.

Yabbut it was an isolated incident.

Always remember, that the left and the right are equally extreme in America and there are no such things as white, Christian, rightwing terrorists. All of these incidents are just isolated incidents involving deranged people who all just happen to be white, Christian conservatives.

Even more rarely is the question asked, "Was Ms. Shawna Forde an NRA member?"

I didn't post that twice; it was all OnAn's fault...

That crazy person is unfortunately from just down the road here in Everett, Washington. This story is barely getting any news coverage here locally, except in the local Everett newspaper, which has a very small readership base....

Only brown people commit acts of terrorism. Anything done by white people is just a "single instance of a crazy person."


Although there is some flimsy evidence that Shawna Forde is a left winger.

In 2007, she was charged with stealing a small container of chocolate milk from an Everett grocery store, which Forde described as a misunderstanding.

See, if this had been left wingers who murdered the little girl, OnAn would be outraged....!!!!!!!!

But since it's rightwing violence, he finds it jokeworthy.

I guess that's what he considers being a moderate.

If you're a scum-sucking douchebag like Olives and Arrows.

But, please, cash that check with pride. I'm sure they'll find another Koch-whore to suck their asses if you quit (for as long as you can live with yourself, I mean.)

I guess that's what he considers being a moderate.

No, that's his rather lame way of trying to distract attention from the facts.

Like most other cowardly chickenhawks of his ilk, he thinks he's being clever, when he's actually exposing himself as the moral cretin that he is.

It would be treasonous to the cause for him to condemn the murderous actions of a right-wing crazy, as decency would dictate, so, instead, he makes a dumb and racist joke about Forde being a "leftist."

He's a fuckwit of great proportion, a chickenhawk of enormous cowardice, and an intellectual midget with little more than a small bag of cheap rhetorical tricks.

The perfect Republican, in other words.

nothing to the rite is disgraceful anymore. may she be illtreated in prison.

so, instead, he makes a dumb and racist joke about Forde being a "leftist."

But where's the supposed "racism"? I have no idea what race Forde is? Please, do tell.
/sigh

And some of you need to get out for a drink or a walk in the forest, anything that might ease up some of those frustrations. Seriously.

It certainly does look like some of you need to do something about all that pent up emotion, or before you know it you'll be wishing death and other bad things for people (like Hedley has done.) Next thing is a trip to the Doctor to prescribe the same re-uptake inhibitors regimen.

The projective identification is strong today.

But where's the supposed "racism"?

You fuckin' miserable little creep. Chocolate milk, which is supposed to be a backhanded reference to the current President.

You're a vile little shit, do you realize that?

Otherwise, you would have not had a handle to make that stupid fuckin' joke. It would have been meaningless without the implicit racism.

On the best of days, you're a little shitheel. I piss on you from a great height, mate.

Orifices and Assholes, one of your comrades in arms murdered a nine-year-old girl for the worst of reasons, and you're making light of it and you're doing your best to divert attention from that simple fact.

You're a nasty little shit on the best of days.

Chocolate milk, which is supposed to be a backhanded reference to the current President.Otherwise, you would have not had a handle to make that stupid fuckin' joke. It would have been meaningless without the implicit racism.

HOLY FUCK!
You must see forms of supposed racism everywhere you look? You're obsessed!

My intention was merely to make sarcastic light of the fact the crime was probably NOT committed by a leftist. So I chose something from the wiki entry that could NOT possibly be viable evidence to that particular end. Chocolate milk or stealing from a convenience store has nothing whatsoever that one could construe as being a leftist trait so I chose that. Given is known it's obvious that the Shawna Forde perp is a right wing nutcase, thus the joke (lame as it it may be). Simple as that....

For your sanity you need to do something to loosen up the tightness you've brought into your own life. I bet only dogs can hear it when you fart.

Like I said yesterday, get out of the house and away from your computer monitor. Have a drink with some friends or go for a walk in the woods. Do something.

I won't suggest you go for a chocolate milk lest you accuse me of some form of racism.

Montag,
Maybe you're not in as bad a spot as you appear to be. Perhaps you do realize how tight you are and are able to joke about that,.... to poke fun at yourself.

I see from your profile you have listed as your occupation:

"Although there is some flimsy evidence that Shawna Forde is a left winger."

"My intention was merely to make sarcastic light of the fact the crime was probably NOT committed by a leftist. So I chose something from the wiki entry that could NOT possibly be viable evidence to that particular end. Chocolate milk or stealing from a convenience store has nothing whatsoever that one could construe as being a leftist trait so I chose that."

Here, I'll help you.... pay special attention to the bolding:

"Although there is some flimsy evidence that Shawna Forde is a left winger."

Olives and Arrows admits his posts are lacking plausibility; and unconvincing.

In the course of a lengthy exchange in a thread below, OnAn accused me, as a dedicated leftist opponent of liberty, of supporting the Hosni Mubarak dictatorship in Egypt and opposing the forces of change.

To which my comment was: "Bad brown acid on the right side of the stage."

Anyway, dickwad, for your information, I do support the reformers and not the dictator... but if you want to read all about who taught Mubarak's torturers their craft, you can read the following article.

You will be surprised to learn that it wasn't us leftist haters of freedom...