You may have heard of this guy... 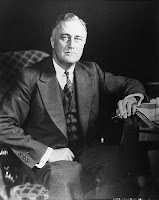 In a bit of cloying irritation Fox and the NFL managed to salute the 100th birthday of Ronald Reagan yesterday during the pre-game festivities to the Super Bowl.

And why not, after all who better to salute the Gipper than another group of billionaires who are going to lock-out their workers and get people to call it a strike?

As Charles Pierce noted, the Super Bowl occurred just prior to January 30th, 1982 the Centennial of Franklin Roosevelt's birth, and that was met with crickets. But then all he did is guide the nation through a Depression and the Second World War.

But he never made a movie with a Chimp so I guess he'll just have to settle for being a far greater President than Reagan.
Posted by Attaturk at 3:31 AM

One can't discount the impact that Hollywood had on politics. Everything about the Reagan White House was stage-managed, and it's been that way ever since (with Reagan at the helm, there simply wasn't any choice--left to his own devices, the public would have quickly seen that he was a doddering old fart rapidly slipping into senility, when he wasn't napping). As long as Reagan's acting instincts were sound--that he could hit his marks and read his lines with something approximating sincerity, the public could be fooled into thinking he was competent.

Of course, FDR had his own vanities--he hated being filmed in his wheelchair--thought that sent the wrong message to the public. But his mind was clear, something that can't be said for Reagan, whose mind was addled long, long before Alzheimer's came to stay.

The brand of stage management that Reagan's people brought to national politics is what eventually gave us Little Boots and "peeance and freeance," and the most corrupt administration in the nation's history. They learned "perception management," as Reagan's handlers called it, very well.

Roosevelt's legacy lives in his deeds.
His deeds are part of our social framework, not a hype job.
Long live FDR's legacy Social Security!!!!!
vox

JFK's 100th is coming up isn't it? will we have a camalotathon?