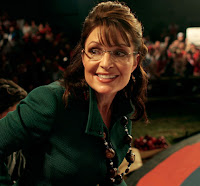 A fool and their money are repeatedly parted per Sandra Fish at Politics Daily.

Although her SarahPAC took in $400,000 in the first quarter and had more than $900,000 in the bank, it gave only $7,500 to candidates between January and the end of March, plus an additional $2,000 to two other PACs. None went to Republicans in the races she targeted.

In other "purely unrelated" news, the Palins have added an additional floor to Chez Moose so as to get a better view of Russia and Wasilla area meth-labs.

But there were some expenses:

So nearly as much de-icing her private jet, as donated to her surely blessed candidates.

Fair value for donors no doubt. Plus Todd's snow-machine has really been awesomely-modified.

(pic from here -- I'd suggest not reading the captions)
Posted by Attaturk at 3:31 AM

How odd that those private jets seem to be going to a lot of paying gigs....

Isn't there something in the tax code about diverting non-profit funds to for-profit expenses?

Inquiring minds want to know, and all that.

No doubt saving up for the surge of tea Bagging activity later this year. Or a new palace.

the GOP is spending stupid as always.

heh/
....very telling that (as of Tuesday afternoon) Attaturk chooses to post on Sarah Palin and Glenn Beck.

(bad news for most of the regulars commenting here, though....)
The former leaders of al qaeda in Iraq Abu Ayyub al-Masri and Abu Umar al-Baghdadi (your former allies) were killed by a joint Iraqi security forces and American military operation. The al qaeda human garbage plotted, planned, and executed terrorist attacks against the Iraqis in recent past, as well as against Americans.

Their deaths are potentially devastating blows to your allies with al Qaeda in Iraq and some very unfortunate worms are sure to choke on their rancid corpes.

(bad news for most of the regulars commenting here, though....)

Surely you know that most of us here are working our way up the ladder to Al Qaeda #3. This is great news.

(bad news for most of the regulars commenting here, though....)

I note that the author of that comment still hasn't enlisted and done his part in eliminating the al-Qaeda scourge that so terrifies his daily existence....

Quite an experience to live in fear, isn't it? That's what it is to be a slave.

It seems to make sense that if (in your mind) I have to enlist to justify my opposition to terrorism that it's only fair that you sign on as a human shield to justify your support of the terrorist scum. Dealo?

The # 3 position probably isn't very secure or longlived, either. The UAV payload gives the terrorist scum the same result as that fly hitting the windshield joke.

What's the last thing that goes through a fly's mind when it hits the windshield?

yes of course it's a logical fallacy.
Which is really the point, it puts highlight on the logical fallacy that one must enlist in order to justify their opposition to terrorism. Even a very stupid leftist can understand this. But alas....denial isn't just a river.

Rebutting an argument for ethical imperatives (acting on one's own convictions rather than perpetrating a life and death moral hazard upon others) with a logical fallacy is not an argument.

Your 'ethics' are entirely those of convenience and your comments are consistently like a shit schmear on a morning bagel.

WTF is a "death moral hazard"?

Yea. The jumbo shrimp that occupies your cranium.