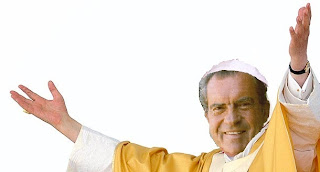 Because it appears that we know what would happen if Nixon became Pope ... or if a whole "College of Nixons" ran the Clergy:

Top Vatican officials — including the future Pope Benedict XVI — did not defrock a priest who molested as many as 200 deaf boys, even though several American bishops repeatedly warned them that failure to act on the matter could embarrass the church, according to church files newly unearthed as part of a lawsuit.

This, of course, is after several years of American Church authorities not acting on the case.

And these are the folks that dictate ... and sadly, have the political muscle ... over reproductive rights in major health care legislation because of their "moral authority".

[Cross-posted at Firedoglake]
Posted by Attaturk at 3:32 AM

Abuse this egregious would have been punished in any other Archdiocese. Ratzinger avoided defroocking the monster in order to embarass Weakland.

Just based on appearances, you could stand the Dalai Lama up next to Ratzinger and tell who the villain was.

200 deaf boys? They don't count because they're deaf.

You know, I wonder about Ratzinger's election. Is it possible they chose him because of his experience in dealing with the abuse scandal? These old Cardinals, who only knew what filters up through the official church organs, were probably scared, and Ratzi was their "fixer" in this area. He'll know what to do, let's put him in charge!