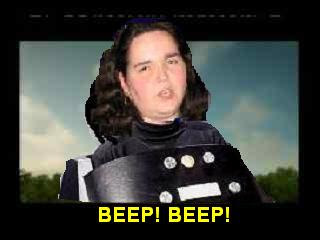 “Welcome to the club of states who don’t turn their back on the sick and the poor,” Sarkozy said, referring to the US health care overhaul signed by President Barack Obama last week.

From the European perspective, he said, “when we look at the American debate on reforming health care, it’s difficult to believe”. [...]

Then to hearty applause, he added: “If you come to France and something happens to you, you won’t be asked for your credit card before you’re rushed to the hospital.”

Well, who cares about what the French think?

As George W. Bush so aptly pointed out, they don't even have a word in the French language for "entrepreneur".

heh/
an imposter above.


If you come to France and something happens to you, you won’t be asked for your credit card before you’re rushed to the hospital.”

No, but if you're a senior and it's a hot summer there's a big chance that you'll die before the vaunted French healthcare plan ever helps you out.

Oh, and speaking of backward countries that's probably why the Fwench have a UN veto, just because China and Russia also have one.

Sure. And no one poor and old will die from the heat this summer in Watts or Harlem or North Philadelphia or East Saint Louis. Nor freeze this winter in Chicago or Minneapolis.

In France, there were 14,802 heat-related deaths (mostly among the elderly) during the heat wave, according to the French National Institute of Health......
The heat wave occurred in August, a month in which many people, including government ministers and physicians, are on holiday. Many bodies were not claimed for many weeks because relatives were on holiday. A refrigerated warehouse outside Paris was used by undertakers as they did not have enough space in their own facilities. On 3 September 2003, fifty-seven bodies still left unclaimed in the Paris area were buried.

The high number of deaths can be explained by the conjunction of seemingly unrelated events. Most nights in France are cool, even in summer. As a consequence, houses (usually of stone, concrete or brick construction) do not warm too much during the daytime and radiate minimal heat at night, and air conditioning is usually unnecessary. During the heat wave, temperatures remained at record highs even at night, preventing the usual cooling cycle. Elderly persons living by themselves had never faced such extreme heat before and did not know how to react or were too mentally or physically impaired by the heat to make the necessary adaptations themselves. Elderly persons with family support or those residing in nursing homes were more likely to have others who could make the adjustments for them. This led to statistically improbable survival rates with the weakest group having fewer deaths than more physically fit persons; most of the heat victims came from the group of elderly persons not requiring constant medical care or living alone without immediate family.

That shortcomings of the nation's health system could allow such a death toll is a matter of controversy in France.

So much for the healthcare utopia that many leftists hold dear, huh?.... Yes, universal healthcare is probably a positive, but I don't hold those same illusions that France or any other European country is in any way more advanced than the US of A.
As a matter of fact I've lived in and/or travelled in 15 (or more) European countries and none were more advanced than the US in any important way. (excepting of course, the Montalcino vineyards, in Italy :) )

i like how teabbaggers point to one imperfection and that's supposed to negate an entire system. by that logic, pointing to a US imperfection negates the entire country's rationale for being.

let's all ignore how katrina victims were ignored and left to die. no siree, america is perfect, i tell ya, perfect. without a flaw. without a mote in its eye.

Say what you will about K-Lo's fickle tastes, but, there's only one man she ever loved, and that's St. Ronnie Raygun. The Mittster was, like, honestly, Raygun's resurrection, and you know how much good Catholics like K-Lo believe in resurrection....

....point to one imperfection and that's supposed to negate an entire system.

the reader "Guessed" seems to be experiencing some basic reading comprehension problems.
Making the case that a given system isn't the utopia that some think it was, isn't an attempt to negate the entire system.

Even a leftist loser like JDM seems to get that. When provided with the facts re some of the faults with the French social health system he easily reverts to his default mode of asking for "kewl investment strategery.....ummm...strategy".

(to better reflect our superior health care system, swamp coolers must be sold non-discounted, and at a healthy profit)

nobody was arguing france was utopia.