Occasionally it does work 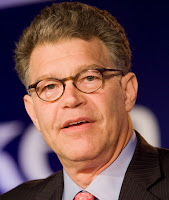 I know that the health care fight has and will continue to be difficult for Democrats -- after all we're the only ones even trying (sometimes half-assed, but half-hearted still beats no-heart at all).

But there are more than a few moments when having the Democrats in control does more than disappoint:

Jamie Leigh Jones claims she was raped by fellow Halliburton employees when she was working in Iraq in 2005...

Jones employment contract with Halliburton (now known as KBR) contained an arbitration clause that required "any and all personal injury claims' to be heard by an arbitrator. Jones eventually refused to arbitrate, wanting her lawsuit to be heard in court.

The Fifth Circuit eventually held that some of Jones' claims did indeed belong in court because the assault was not related to her employment. KBR had appealed the decision to the Supreme Court, but after initial briefing, KBR withdrew its appeal on March 11.

And Franken has done more than just this, he taught Joe Biden how to use profanity effectively.

[cross-posted at Firedoglake]
Posted by Attaturk at 3:35 AM

WaPo article today indicates taht Franken kicked the shit out of Axelrod, which is just what needed to happen. Bravo, Al.

it takes brains to be that funny. imagine if he had been sitting when the death panel shit was going on.