...but using a dictionary, apparently too "extreme"

Via Balloon Juice, the note that was attached to a brick thrown through the local office window of New York Democratic Representative Louise Slaughter. 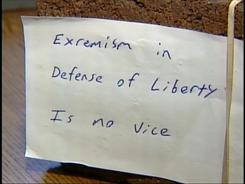 Now local TV station 13-WHAM reports that Slaughter received a death threat: “Assassinate is the word they used…toward the children of lawmakers who voted yes.”

They just had to say it, not spell it, as that might have preemptively caused their brains to blow up. But yes, the crowd that likes to chant "Baby Killer" at pro-choice people is rooting for children to be killed. They're ...JUST...THAT...AWESOME!

And Mistermix's post adds that the guy who led on the cheering and is now half-heartedly backing away from using violence to prevent the Government taking over health care...

...is on Social Security Disability.

And in case it isn't crystal clear, Social Security Disability includes Medicaid. It's a twofer - the guy is on Medicaid, ipso facto.

Damn you, Attaturk! I was going to post that up with some pithy headline along the lines of "The Future Belongs to Those Who Can Spell".

And of couse the dumbshit is on Social Security.

Seems to be yet more evidence of an evolving pathology.

If you care to be provocative in internet forums link to these two pics. The first is Tim McVies shirt he wore on that fateful day. The other of Bailey Almons.

Exremism in the defense of what the TeaBaggers want and/or don't want is criminal.

Now, imagine you are dealing with a four year old......

i can't wait for those FEMA camp spelling classes.

I am pleased to report that at my last neighborhood Obama Sector Meeting - Sector 432, it was reported that we are more than fulfilling our Granny Death Camp Roundup quotas and that Operation Re-Education Roundup: Phase II the Tea Bagger/Patriot Nation is getting under way.

I will be sure to mention to the sector committee your excellent suggestion for discussion at the next full meeting. Nice work comrade pp.

Empty Guantanamo of innocent terrorists and use it as a camp for teabaggers an prolife extremists who incite violence, whether it is breaking windows or inciting Scott Roeker in killing George Tiller
vox

excrement on da fence of lavatory is no dice!

a salute back to comrade jimmiraybob.