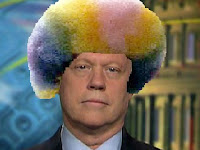 Lost over the last few days in a deluge of imbecilic comments by the John Birch Society and the Council of Conservative Citizens Republicans, was this completely over-the-top and unintentionally hilarious statement of Georgia Republican Paul Broun:

If ObamaCare passes, that free insurance card that’s in people’s pockets is gonna be as worthless as a Confederate dollar after the War Between The States — the Great War of Yankee Aggression.

"The Great War of Yankee Aggression"? Really, that's how you are still referring to it? Who the hell is this guy, Theodore Bilbo? (worst hobbit ever -- even the Sackville Bagginses hated that guy [ed. "NERD!"])

But if nothing else, Broun has a history of profound thoughts...

While watching an NFL game, Broun became entranced by a “gentleman with this big type hair wig on” holding a “John 3:16” sign. “As I sat there in my office that fall trying to figure out life, I picked up the Bible and read John 3:16,” Broun said. He suddenly transformed into a true believer, a cadre of the Christian right.

Anyone who grew up in the 70s and 80s and watched sports remembers that guy.

And, as Digby noted a while ago, that ubiquitous guy in the wig with the John 3:16 banner -- is now doing life in prison on multiple kidnapping and terrorism charges.

So he certainly makes an inspirational symbol for a Republican Paul Broun.

(cross-posted at Firedoglake]
Posted by Attaturk at 3:30 AM

All they want to hear is 3:16, Rapture, Baby killer! until it unleashes that mighty killing machine of rightthinking gun owners exercising their rights. Vox

Man, nothing can go wrong today after learning that! The "Series of Tubes" is hot today. Thanks, Dr. Turk!

Maybe the funniest part of this is his line, "As I sat there in my office that fall trying to figure out life...."

The videotape of that would be funnier than the guy in the wig....

please tell me there are death panels.
confederates are funny.