If this were Obama, it would lead on Fox & Friends for 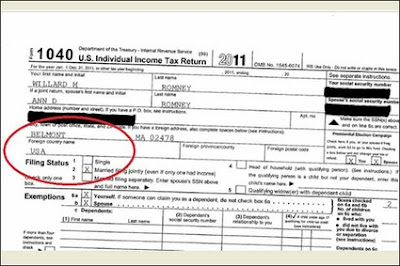 When the former Massachusetts governor released his official 2011 tax return Friday, he (or whoever actually filled out the form) appeared to have mistakenly referred to the United States as a foreign country.

"If you have a foreign address," the tax return instruction reads, "also complete spaces below." In the space below, under "foreign country name," Romney's form reads "USA."

Several tax preparers confirmed to Whispers that "USA" should not have been written in that line—assuming the Republican presidential nominee is actually a citizen of the United States.

No word from Donald Trump yet if he wants to see the original long form version of the tax return.

To be fair, Romney thought his tax returns were really just about where his money is.
Posted by Attaturk at 6:20 AM

His "car elevator" at his La Jolla compound is for the stolen circus lion in the basement.