The Least Interesting Man in the World 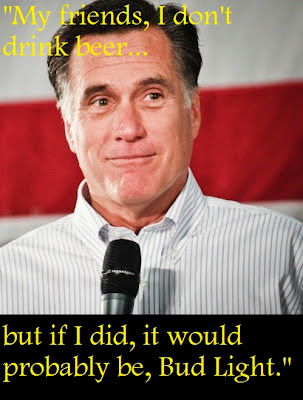 I don't always pay taxes to the federal government, but when I do the least I expect is that it make me its king.

Or Miller 64, easily THE worst beer I've ever tasted -- like stagnant water with the barest hint of artificial beer flavoring agent. Ugh.

Next, Willard claims foreign policy experience based upon the amount of time his money has spent overseas.

He both flips AND flops.

When he masturbates, Joseph Smith ejaculates.

You can see his empty suit from space.

He carries his wife's vagina in his pants pocket...and yet never dials.

Ayn Rand, in the form of Paul Ryan, arouses him in an unseemly manner.

His blood is a mere rumour.

He once told the truth... just to see how it feels.

Much more of a Coors Lite kind of guy.

ha! he would drink $$$ IMPORT beer. american beer is for serfs.think, people think. what is jamaican beer? is here a swiss beer? cayman islands brand?fuck beer. only champagne.