"Mitt took himself out of context"

Well, I guess that's all you've got. 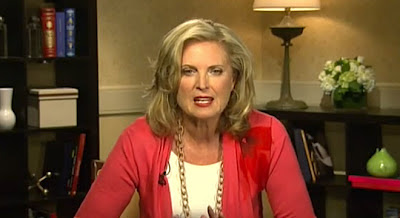 "It's unfortunate when something gets misinterpreted like this or it gets taken out of context because if you really do listen to everything he does say, he's talking about what we're facing in America today," Romney said in the interview. According to Buzzfeed, the Romney campaign uploaded video of the interview to YouTube with the title "Ann Romney to FOX31: Mitt Doesn't Disdain the Poor" before quickly removing it.

They quickly took it down huh?

WAIT, i thought she was his best weapon......flop?

The best part was when she said that Rmoney didn't need the job, so that means he has integrity.

Yes, raw, naked ambition, a lust for power and overweening self-entitlement are always signs of integrity.

No, really. I believe this. I think that it's only the poor who happen to also be parasites, moochers, looters, and takers - and yes, I'm looking at you gampaw and gammy - that are weighing this once great nation down like meat anchors, that are the objects of his disdain.

All the hobo lowlifes like students and military personnel and the working poor trying to make ends meet that cling to big government to keep them from living on the streets begging for alms and scrapping for roadkill and wild onions.

What ever happened to our other freedoms? Like uncontraolled cholera and dysentery? And smallpox and rampant typhoid and plague outbreaks. What happened to so much that made America so great.....before big nanny government stepped in with their sanitation codes and their Centers for Disease Control and other namby pamby feelgoodism-based projects to garner the parasite vote?

I hear you Mary Matalin, I hear your plaintive cry.

All I can say is, vote Wolverines! Vote Ayn Rand! Vote Ryan/Romney 2012 - They'll take this country back!

He doesn't disdain ants on the sidewalk, either. They're not worth the trouble. He just steps on them.

BTW, I'm tired of her already.

Just look at her, fr chrissakes....

She has gotten so numb to the screams of the slaves....

...and we are to have this, this thing for m'lady of the white house??