The Shame of the Corn Belt 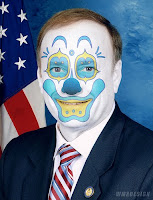 Last week there was a pro-health care rally in Washington, D.C. that had a rather large attendance. Not that you heard much about it from the media. On FoxNews they briefly claimed the peaceful protests as a mob, ready to storm the gates of the Ritz Carlton to get their point across. But as shown here, this group included a women in a wheelchair, never a great accessory for storming.

Meanwhile, there was another round of teabagging yesterday and it had the usual assortment of grammarians and amateur literacy buffs -- oh, and some nice irrational threats like accusing Pelosi of treason.

But with Michelle Bachman physically in attendance (if not mentally), Iowa Congressman Steve King knew he had to up the crazy to "11" (ah, who am I kidding it's always at 11 for that guy) in order to impress George Will. And what did this sworn upholder of the Constitution preach?

Yes, the striking parallels…which explains all those tanks and soldiers the Obama Administration has rolling in the streets.

Oh, and who can forget Joe Biden claiming Dick Cheney's fall from the top floor of the Executive Office Building being an unfortunate suicide?

Or the millions of American's sneaking into the Canada to get a taste of freedom...from health insurance?

Although if a Velvet Revolution gets Slovakia the South to leave... (I kid).

[Cross-posted at Firedoglake]
Posted by Attaturk at 3:31 AM

I don't kid, and I don't trust 'em. No way to keep the bomb or other WMDs away from 'em if they secede. They'll be dangerous. So I guess we're stuck together.

Forget the South; they had their chance at secession and failed. The real shame of the corn belt isn't King, it's the folks who keep him in office.

I say we cut the entire 5th District off from Iowa and rename the area The Republic of Eastern Idaho.

I wish someone would put King in the well of the House and question him about his belonging to the very government he proposes sedition against.

A little censure might slow him down a bit. Not much, but a little.

did the republikkkans all get texass history books?!?