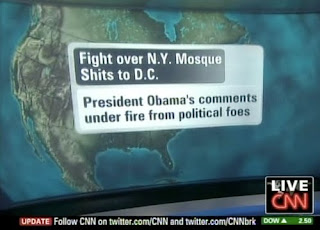 In a familiar it's already too late attempt to demonstrate that the truth is putting on its pants now that the lie has circled the globe a few dozen times -- the Upshot writes that the "Ground Zero Mosque" is 'Holy Roman Empiresque' in its definition -- as it is not at Ground Zero, nor is it a Mosque. They interview several news organizations on their lazy phrasing. It also calls Pam Geller a "conservative" when it fact she is "a complete and utter right-wing nutcase and bigot".

However, there is one unintentional piece of dark comedy to finish the piece:

The Upshot has reached out to Fox News to see if it has specific policies and will update when we hear back.

Yeah, good luck with that. A policy of being lying, douchebags is custom and practice, as opposed to committed to writing.

"Fox News has specific policies"... as if Fox were the government.

I hate the term "Ground Zero."

The planes hit many, many floors above ground level.

Has anybody done an analysis of where people actually died? I bet hundreds of deaths were also far above the ground level.

...to Fox News to see if it has specific policies and will update when we hear back.

Fox News (aka Strategic Republican Party & wing Nut Communications Central) has a strategy. Support Republicans. It's specific policies are 1) disrupt the democratic process, 2) attack all things democratic and Democatic, 3) undermine as much of the Constitution/Bill of Rights as possible, and 4) advance the Republicans and uber right-wingnut causes in order to escape accoutability and maximize profits.

Now, on with the update.

what happens when silicon seeps out of your breast implants and migrates into your brain?

give it a little time. 70% used to believe iraq had wmds.

Has anybody done an analysis of where people actually died? I bet hundreds of deaths were also far above the ground level.

Hard to say, since the whole complex eventually ended up at ground level.

I thought it was the Yakuza. No, wait, that was New Orleans.