Tomorrow belongs to all of us 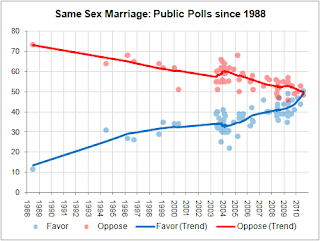 While Republicans cravenly play to their base and the President and much of the Democratic Leadership cravenly stays quiet, there is some good news as pointed out at the Great Orange Satan, the social issues of the "professional left" are becoming the majority viewpoints of we mere amateurs.

Do you think gays and lesbians have a constitutional right to get married and have their marriage recognized by law as valid?
49% Yes, 51% No

Do you think gays and lesbians should have a constitutional right to get married and have their marriage recognized by law as valid?
52% Yes, 46% No

So, when the average person -- a non-legal scholar -- is asked what they think the Constitution says they are split, but support for the belief that same sex-marriages SHOULD be a Right grows.

And it's growing all the time. The bulk of the support comes from people thirty-five and under who favor it overwhelmingly. So even if the Democratic establishment will not lead, they will still have to get out of the way.

But hey, in the long-run, as their base dies off, the Republicans will probably still have this guy:

Yeah, suck on that one every religious organization in the country.


(cross-posted at Firedoglake)
Posted by Attaturk at 3:31 AM

"...non-profit organization employees are "lazy idiots" and "rapists in terms of finance and economy."

Well, the syphilitic, drug and Viagra addicted, pustulent sac and gas-bag is right! When you think of rapists and finance and the economy, don't the Heritage Foundation and American Enterprise Institute immediately come to mind?

Ba-ZINGA, Anonymous! And, don't forget the rapists and lazy idiots at the Project for the New American Century.

buttbutbut don't you see? georgee was AWESOME for the rich and fetus lovers! the rest of america DOES NOT MATTER.