It takes The Village 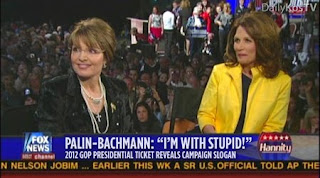 It sure seems like a rare admirable idea on the part of some members of the Village to finally notice that Sarah Palin is addicted to attention and perhaps they should stop enabling it.

Not that it will work, just someone had the notion.

But even if they pay less attention to "Her Irrelevancy", they'll find someone else of similar ilk to cover.

Tea Party favorite and one of the leaders of the lunatic fringe, Michelle Bachmann is going to give her own response to President Obama's SOTU Tuesday night after Paul Ryan gives the GOP's sanctioned rebuttal.

FoxNews will be giving out two-rebuttals, one featuring Bachmann Wanker Overdrive, to go with four hours of Krauthammer and Dick Morris telling us we need to cut social security even more...uh, because that will create jobs.

Hey, at least the Democrats still have one news network that occasionally allows a liberal to speak.

Still can't understand how Bachmann didn't get a starring role in "Idiocracy."

but he isn't viral.