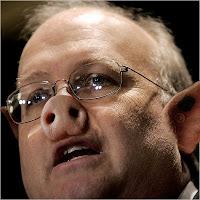 Well, now we know what sausage-casing in glasses Karl Rove meant when he said this:

Presidential adviser Karl Rove, an architect of Republican political strategy, says he's confident his party will hold both chambers of Congress. He says that despite public polls that show Democrats have a strong chance of winning. Why is Rove publicly confident?

Regardless of the outcome of the 2006 election, why was Rove confident?

A long-running federal investigation has found that White House political aides to President George W. Bush engaged in widespread violations of a federal law which limits partisan political activity by government employees during the 2006 midterm elections.

A 118-page report issued Monday by the little-known Office of Special Counsel cites numerous violations of the Hatch Act by the Bush-era White House Office of Political Affairs. The report concludes that federal taxpayers footed the bill for improper activities that were intended to advance Republican political candidates.

It helped, as Rove knew, that the Bush-era head of the Office of Special Counsel was about as unqualified for his job as you'd expect.

And just like Iraq, GITMO, and a wide variety of authorized tortures, there will be no further prosecutions, I'm sure.

(pic from KeninNY at Down with Tyranny)

Some fine day (it was supposed to be today), Scott Bloch will be sentenced for criminal contempt of Congress, the charge he pled guilty to in exchange for having all the other charges dropped. Hope for a smidgen of justice to be dispensed. Expect probation.

Please, no pig nose on Rove.

Pigs are intelligent anf fun. Left to their own devices they run around the woods and root for...well, roots. They are clean and peaceable.

And at the end of their lives, they provide humanity with the many lovely products of their body.

None of the above can be said about K. Rove.

consequences are for democrats only.

If Rove roasted on a spit long and evenly enough, he might provide a suitable roast for his own fellow corporate magnificos at Rancho Mirage this month.
vox