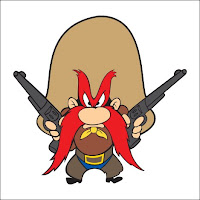 The Second Amendment fetish is strong in Florida as two Republican state legislators have managed to propose separate bills that truly compliment each other.

First, there's state Senator Greg Evers who has introduced a bill that would allow firearms, even concealed ones, to be carried on college and university campuses.

Because letting the monotony of periodic binge drinking be complimented with gunfire is truly a chance to teach the "benefits" not only of the Second Amendment but also the diminished capacity defense.

And this shall be complimented by the bill introduced by one put forth by Rep. Jason Brodeur to make it a felony...

...for a physician or staff member to ask patients or family members of patients if they own guns or store guns at home. If found guilty, the medical provider could be fined up to $5 million or face up to five years in jail.

Oh, sure it tries to turn the Second Amendment into a way to shoot the First Amendment to death; sure it would make, for example, counseling those with suicidal ideation impossible.

But this is Florida, these are Republicans, and the NRA's state lobbyist considers the latter the most important item in this years legislative session.

The great state of Utah already encourages students, janitors and sundry kooks to pack heat on all college campuses. BYU and the University of Utah may now lose their main claim to fame as the only state where students and their parents can legally bully professors into raising their grades by implicit threat of immediate death or great bodily harm.

Well, at least you still can’t ski in Florida.

and how pray tell is a mental health physician supposed to ensure /find out if the person he's dealing with doesn't have a gun he's going to shoot himself or others with? Knowing those things is a matter of public safety.

These guys are either stupid to the nth degree, or are sociopaths.

consequences no longer matter. if they ever did.

Dude, you used the word "complement" three times, and you spelled it wrong each time. Points for consistency, though.