She even trotted out the phrase "blood libel".

Naturally, the Washington Post has this story on the front page -- so how could I not put it up top on this blog?

Meanwhile, guess who gins up the love of which portion of this poll?

Do you think it is ever justified for citizens to take violent action against the government, or is it never justified?

It's bad enough that 11% of anybody says it's justified, but the fact that it's another 250% higher amongst the GOP tells you what base is being appealed to with the Second Amendment fetish, birthers, and saying someone "hangs around with terrorists".

Sarah Palin would be on their proverbial wedding cake along with this asshole. 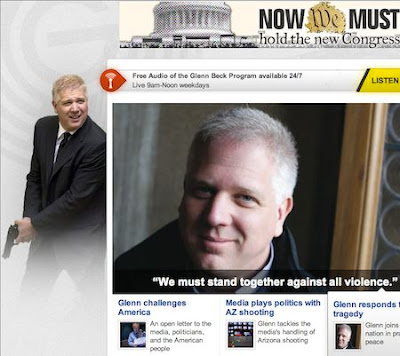 I agree, so I can't believe I'm about to say this: that poll question isn't very good. It essentially is just asking, "Do you think violence is ever justified?"

A better question might be "Do you think it is justified for citizens to take violent action against today's United States government, or is it not justified?"

ALL TeaBirchpublicans are victims. All the time. And everywhere. For ever and ever. Their leaders are all double plus good victims that cry, whine and wail over their victimhood.

They are always under assault. Their America has been stolen from them. All they want is their property back from the diseased citizens that vote differently than them.

If one of the thieves gets shot in the head it's still their victimness to claim.

It's only a proper democracy if only their vote counts. Really, that's what Jesus said.

And, just for the record and to be fair, I think that it should be pointed out that Tucker Carlson did not call for the execution of Gabrielle Giffords or random people in close proximity.

And, just to be fair, when Rush Limbaugh calls for the execution of political enemy Julian Assange by a "bullet in the brain" he is making a principled conservative argument and also not call for the execution of Gabrielle Giffords or random people in close proximity - even if they are, like Assange, identified as dire threats to our very existence.

And I now realize that when principled conservatives advocate execution of their ideological enemies, implicitly or explicitly, that there is a nuance that my feeble liberal brain does not comprehend and it is that weakness in my diminished thought process that oppresses them and thus makes them the true victim of my obvious hate expressed as criticism.

My apologies to those who have been trampled and have suffered under the weight of my tyranny - especially you Sarah.

when principled conservatives advocate execution of their ideological enemies, implicitly or explicitly, that there is a nuance that my feeble liberal brain does not comprehend

Jimmiraybob, please allow me to explain this so your feeble liberal brain can comprehend it:

Conservatism is not about actually 'conserving' anything.

It's a ritual kabuki dance where miserable people get together to spew some hatred.

I guess folk that say "no" to the question "is it ever justified to overthrow the government by force or violence" are either (1) brain dead or (2) just plain stupid or (3) know nothing about anything that happened more than a nano-second ago.