And now a moment of sports

Dear Larry, in reality and located in a land that isn't on the left or right coast lives this guy: 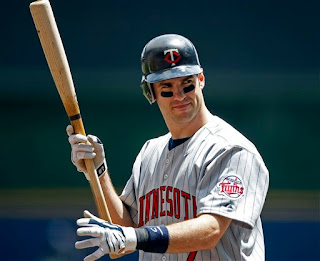 He's 27, he's won three-batting titles (as many as all other cathers in Major League History combined) and was AL MVP in 2009, the first catcher to lead the league in batting average, on base percentage, and slugging percentage in a single year, and the first player to lead the American League in all three since George Brett did it nearly 30 years earlier. He only batted .365! highest batting average by a catcher in history -- lifetime average .325 -- as a catcher!

He led the American League in batting average (.365), on-base percentage (.444) and slugging percentage (.587). This is rare stuff, the Sabermetric Triple Crown. Alex Rodriguez hasn’t done this. Nor has Albert Pujols or Ken Griffey Jr. Nor did Joe DiMaggio, Willie Mays or Henry Aaron. It’s the kind of thing done by men like Babe Ruth, Honus Wagner, Ty Cobb, Stan Musial, Barry Bonds and Ted Williams — the absolute dominant hitters of their eras. And now Mauer stands with them...

Of the candidates for best catcher in history, only Mickey Cochrane — not coincidentally the catcher Mauer seems most similar to — ever led the league in even one of the percentage categories. He led the league once in on-base percentage (1933).

He's also regarded as one of the best, if not the best, defensive catcher in baseball, has been for sometime, two gold gloves, many more to come.

Something tells me, like the evidence, that Buster Posey while a promising player, is not better than Joe Mauer and has a way to go to catch up.

You have a "teabagger's knowledge" of baseball Larry.
Posted by Attaturk at 7:53 AM

I'm with Larry. Mauer doesn't have the size to play in The Show.

Hell, the frigging NYT Sunday mag actually had a long story on Johnny Bench when he was the same age. Now it's as though the Midwest doesn't exist except for the odd weather story.

I'm absolutely not saying that Posey is going to be as good as or better than Mauer, but judging solely on rookie seasons or seasons where they were the same age, there's definitely a case to be made.

the midwest is as american as hawaii to the coasts.

Larry King really likes to live on the edge now that he is going out to pasture. I can't believe he would so blithely go into the field of predictions and prophesying. vox