Forget what it says, I know what it means! 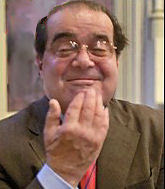 Scalia is truly an embarrassment. The one thing even the "originalists" and the "living Constitutionalists" should agree upon is the very FIRST thing one looks for in a statute is the wording.

But not to Scalia, no he just flicks his hand under his chin and says it only means the EP clause applies to the freed slaves, not to, oh say women. Unless, of course, there's a Republican and power involved.

In Bush v. Gore, he joined the majority that stopped the vote recount in Florida in 2000 - because they said equal protection required it. Is there really any reason to believe that the drafters - who, after all, were trying to help black people achieve equality - intended to protect President Bush's right to have the same procedures for a vote recount in Broward County as he had in Miami-Dade? (If Justice Scalia had been an equal-protection originalist in that case, he would have focused on the many black Floridians whose votes were not counted - not on the white President who wanted to stop counting votes.)

It's funny who Tony thinks gets the 14th Amendment's protections, as the last time I looked in 2000 George Bush wasn't a freed slave.
Posted by Attaturk at 6:59 AM

the tubby turd lies according to what supports his ideology, inconsiderate of any concerns for the majority of citizens.
If demeaning descriptions of these fascist sound demeaning, dammit, we need to stop playing nice.vox

"Strict Constructionist" means "I strictly construct it to mean what I want it to mean" and "Constitutional Originalist" means "the Constitution means what I originally wanted it to mean." Scalia is the most activist and results oriented Supreme Court justice in my lifetime, and I was born in the Truman administration.

Note that Big Tony's hand-flick under his chin is usually accompanied by a hearty "Vaffanculo."

But Mr. Justice, what does "any person" mean if it does not mean any person?

`When I use a word,' Humpty Toni said, in rather a scornful tone, `it means just what I choose it to mean -- neither more nor less.'

`The question is,' said Alice, `whether you can make words mean so many different things.'

Scalia has got to be one of the dumbest people in the legal profession. Definitely an "unflushable" that rose to the top.

we could always reinterpret that 2nd amendment, too.

i SO want him to get purgatory and no straight to heaven.

W was "freed" from slavery to cocaine and alcohol. Meaning he got old enough to remember to hide them.