I guess what I'm saying so far is, it is a theme 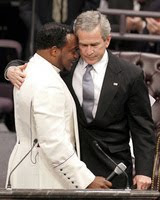 It does seem that ironically -- in a tragic way -- these blatant bible-beating homophobes do seem to have a proclivity for molesting young boys. I suggest we prevent them from being teachers in our schools:

Two young men in Atlanta have filed lawsuits against nationally known televangelist Bishop Eddie Long, alleging that Long coerced them into having sex in exchange for luxury trips, cars and cash. In addition to preaching against homosexuality to his Atlanta mega-church, which seats 25,000, Long has appeared on national television to argue against same-sex marriage.

the down low is bubbling up.
pansypoo