What this guy says 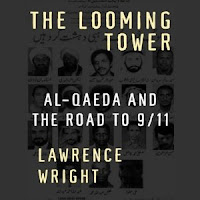 A few years ago, Res Ipsa, was kind enough to send me Lawrence Wright's 'The Looming Tower'. The subject matter was the rise of Islamic Extremism, it's origins, and focused on the period from the end of the Second World War (and the discovery of oil deposits on a huge scale), exploitation, wealth, and counter-reaction to both as it eventually came to rest in Bin Laden and Zawahiri. It is, without a doubt, the best book I've ever read on how we came to the place we were on 9/11/01. If you haven't read it, you simply must do so, but don't just rely on me, Josh Marshall has come to agree.

What Lawrence Wright says about the effect of domestic and international politics on groups like Al Qaeda is authoritative and should be listened to:

The best ally in the struggle against violent Islamism is moderate Islam. The unfounded attacks on the backers of Park51 and others, along with such sideshows as a pastor calling for the burning of Korans, give substance to the Al Qaeda argument that the U.S. is waging a war against Islam, rather than against the terrorists’ misshapen effigy of that religion. Those stirring the pot in this debate are casting a spell that is far more dangerous than they may imagine.

Those stirring the pot in this debate are casting a spell that is far more dangerous than they may imagine.

Add this to the many reasons why Pamela Geller is out of her depth.

And, that's being kind to Pammy Shrieks.

You should be women, And yet your beards forbid me to interpret That you are so.
Macbeth I,iii, with the witches on the Heath
Wer such things here as we do speak about? Or have we eaten on the insane root That takes the reason prisoner? Ibid
vox

Those stirring the pot in this debate are casting a spell that is far more dangerous than they may imagine.

that's what the ghouls want. death, chaos, fear & destruction is good for business and puts em back in power.

after all, chicken hawks aren't made to pay any consequence for the reckless wars they've wrought. why should they stop?