In the not too distant future...

When I was a law student I remember getting up on Saturday morning to tune in Comedy Central in it's earlier days before it was all Stewart, Colbert, Cartman and some hack being roasted with the same crap they roasted the last hack with. In particular I watched Mystery Science Theater 3000 religiously. In fact, my middle-aged nerd cred allows me to say I've got about 150 episodes on tape.

But enough about me, let's talk about what I think. One of the memorable episodes was 'Cave Dwellers' a riotously bad swords & sandals flick (episode 301 -- "NERD!") that starred Miles O'Keefe, his loin cloth and a hang-glider. During the opening credits one of the commenting puppets asks, "How much O'Keefe is in this movie?" for which it is replied, "Miles O'Keefe".

I best leave it up to the experts: 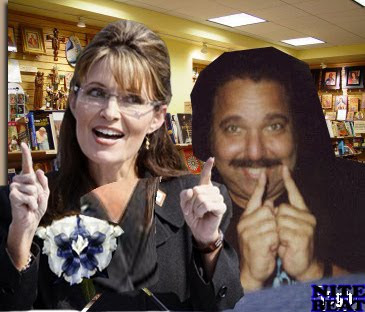 illustration from bencossette at flickr.com

So this is the part where one of the perky blondies in the CNN bordello gets humiliated, and we're supposed to be outraged here. Oh noes.

O'Keefe is indeed the tip of the spear of the conservative movement.

Among his props were fuzzy handcuffs, champagne, strawberries, and posters of naked women.

spear or paring knife. wait. butter knife. so far he hasn't been too sharp.